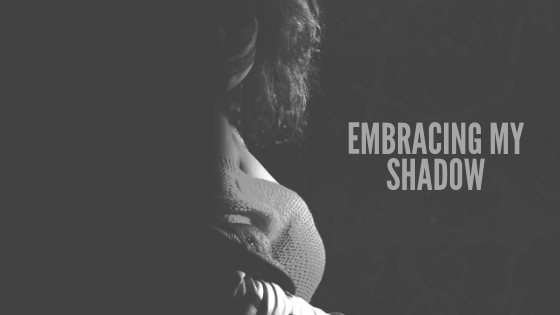 “People will do anything, no matter how absurd, in order to avoid facing their own souls. One does not become enlightened by imagining figures of light, but by making the darkness conscious.”

The path to peace has been a turbulent one for me. Learning to love my shadow has been challenging at times. It would be overly simplistic to say it almost killed me but at times it didn’t feel too far off the mark either.

My shadow was created before I even had the words to explain what it felt like to have my world fall apart. I remember sitting by myself, breaking crayons in my tiny hands, thinking that I could stop talking and the world would move for me. It would bring back the person I had lost but it didn’t happen. Even after a year had passed without me saying a word, the world still refused. What I learned in that year was how to live in the quiet and watch the people around me. This silent year, early in my life, would forever change me and how I would interact with the world.

A year or two later, I again would lose someone, my best friend. Before I ever had the chance to know the stress of a first day of school, I would know the heartbreak of death twice. This pattern of loss would continue every few years into my early twenties leaving the wreckage of anger, grief, and isolation burned so deep within me that my only solace was my shadow.

It took a long time to walk away from those old, self-destructive habits, to learn to talk to people when I am hurting, and to tear down the walls I had built around myself. It took even longer to understand the nature of my shadow. You see, I had carried with me a false belief that my shadow was my death looming, a destructive force, but in reality it was my pain; trying its best to save me from what I couldn’t process or grasp at the time.

After many years of work personally, with a professional, and with native healers, I began to see the love that lived in my darkness. Through it all, I had been loved by a part of myself that was a warrior, a fighter, a goddess. A part willing to set the world on fire and walk away from anyone to keep me safe. The problem was I had learned to lean too heavily on it and to expect too much from it.

Healing meant apologizing to my shadow for the burden I had placed on it; thanking it for all it had done to keep me alive through the violence and death; and giving it the gift of peace that had been hard earned.

So to everyone doing shadow work,